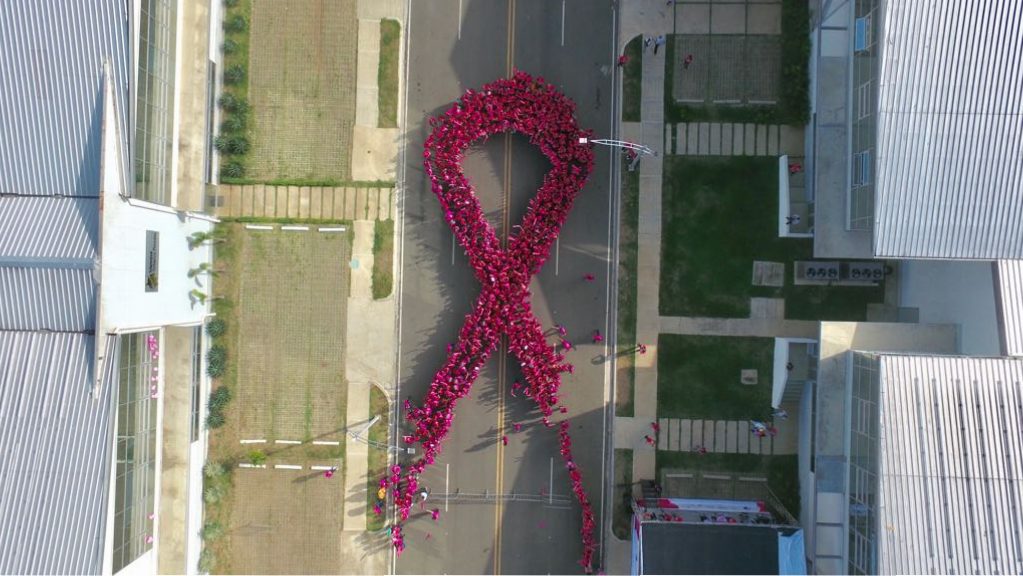 Santiago.-Friday, October 20, 2017- For the third time at Víctor Espaillat Mera Park (PIVEM), some 800 women formed the Great Human Loop in support of breast cancer prevention, the most common tumor variety in women in all the world.

The conformation of the Great Human Loop is the peak activity of the “Because I love you” campaign of the Corporación Zona Franca Santiago (CZFS), which integrates 80 companies from the industrial premises and as strategic allies to several health providers.

This year, “Because I love you” assumed the motto “Celebrate life”, having as spokesmen laborious women of the free zone who are currently fighting a fierce battle against breast cancer. One of them, Juana Cecilia Pichardo, was diagnosed in the last version. In front of hundreds of his fellow zoneras he issued a moving message where he evidenced the need to continue cultivating sorority among women. ¨ Thanks to Because I love you I discovered an enemy that made me stronger. With the support of my family, my colleagues in the factory and my community, I continue to offer the best of me, thanking for the enormous strength that is born in this process of overcoming cancer, ”he said.

In front of the free zone ships, the women raised their hands and joined their voices to the message “Celebrate life” and assume prevention as a shield against cancer. This effort to educate and raise awareness about the disease takes place during the month of October in the Víctor Espaillat Mera Park (PIVEM), where a specialized unit for free mammography and free sonomamography is installed.

Additionally, through “Because I love you” educational talks were held in the Rafey, Mella I, Cienfuegos, Ensanche Espaillat sectors, emphasizing prevention as a way to mitigate the statistics of a disease that does not know skin tone or social position.

Miguel Lama, president of the board of directors of the Santiago Free Zone Corporation (CZFS), reported that to date, more than three thousand women have been favored with specialized studies from the free zone. ¨ We are excited to contribute both to the education and health of our working community, through the campaign Because I love you. We thank the human resources departments and allied companies that have identified with this beautiful work, ”said Lama.

ADOZONA are promoting the initiative to bring schools to...
Read more
Diseño web